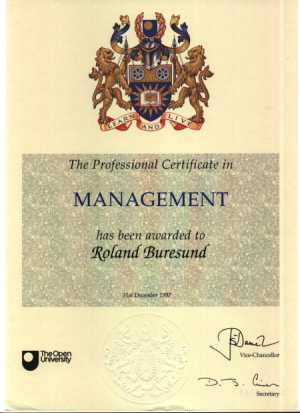 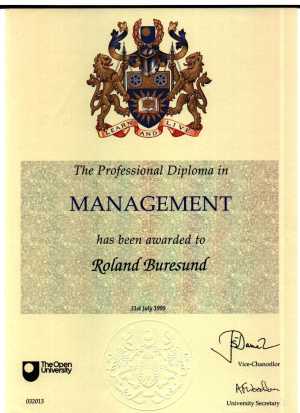 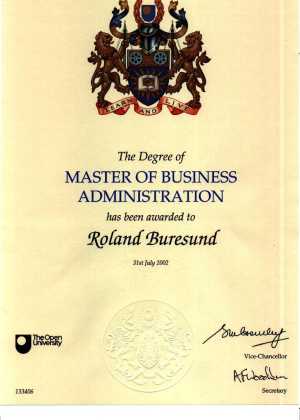 At long last, after five years studying distance courses and having meetings all over Europe (Milan, Munich, Frankfurt, Den Haag, Paris, Manchester, Birmingham, Milton Keynes, Winchester, Brussels, Amsterdam, Cambridge, Geneva, and a number of strange towns in the UK which I no longer remember the names of) and after having written numerous assignements and been sitting too many exams, I get my award!!!! Happiness is the three letters MBA!! And the added bonus of a lot of frequent flyer miles. A quick estimate, shows that I spent about €50.000 on travel, €20.000 on lodgings, €15.000 on books and other materials and approx. €25.000 in fees, which gives a grand total of €110.000 plus some additional expenses (let us assume another €10.000). This means that different employers spent €120.000 to ensure that I would get my MBA (all done via contractual obligations). Now when I am finished, I think it was worth every penny (but it wasn’t always so). The next project right now is to get other non-MBA Swedes to understand what the difference is between a BSc in Economics and an MBA (which Sweden of course doesn't recognise, regardless of AMBA and EQUIS status, as we don’t have any MBA awards here). Sigh, I've got work to do. 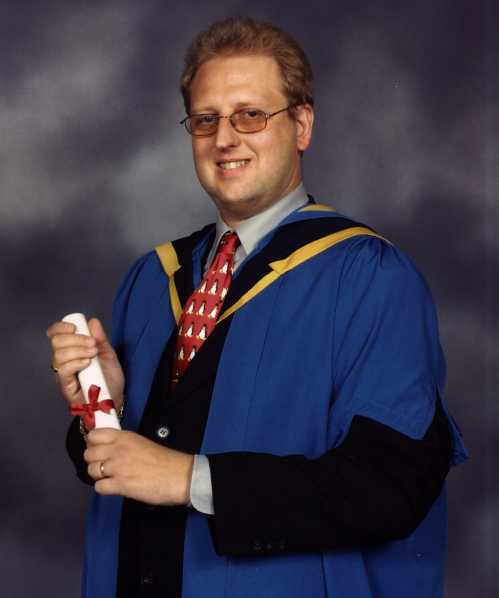 The proud exam photo (don’t you love academic dress? Those with good eye-sight will notice the Linux penguins on the tie.) 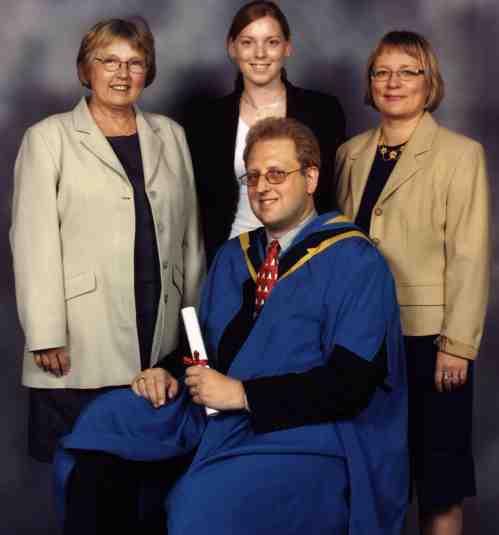 From left to right: My mother Anita, my Sister Annika (Nikko), Me and my Wife Riitta (which stood by me while I studied, even if she could get pissed from time to time. Hell, she even forced me to take a one year sabbatical, just because we had a child …). 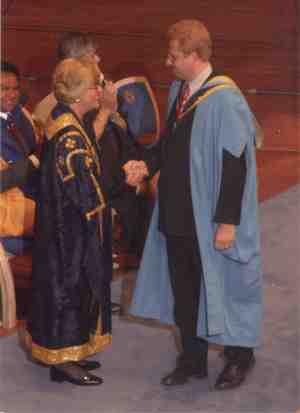 The traditional handshake and congratulation from the Headmistress (this sounds naughty… better not tell Riitta. Ah shit, she’s in the audience!) 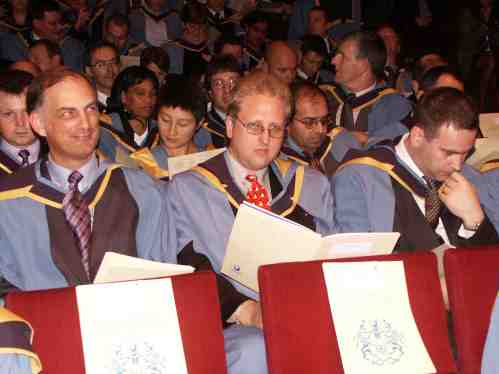 Some of my colleges and myself just before the event.

The Graduates itself from the The Year of 2002

OK, I am now officially over-qualified for all jobs that I look at alternatively too old with too little experience after the MBA award, as Swedes either don’t understand what an MBA is or is in too much awe of it. Sigh. According to the Lissabon Convention and the Bologna Agreement (which Sweden has signed according to Högskoleverket), the signatories agrees to recognise each others university awards. Of course, I still needed to apply for a recognition, which I did in September of 2003 and was awarded in February 2004 by the Swedish National Agency for Higher Education! Also, by enrolling in the association of Civilekonomerna, I'll gain the right to call myself a Swedish Civilekonom (granted, I could do it anyway, as the title isn't protected in Sweden, but it is more fun to have some proof of right). 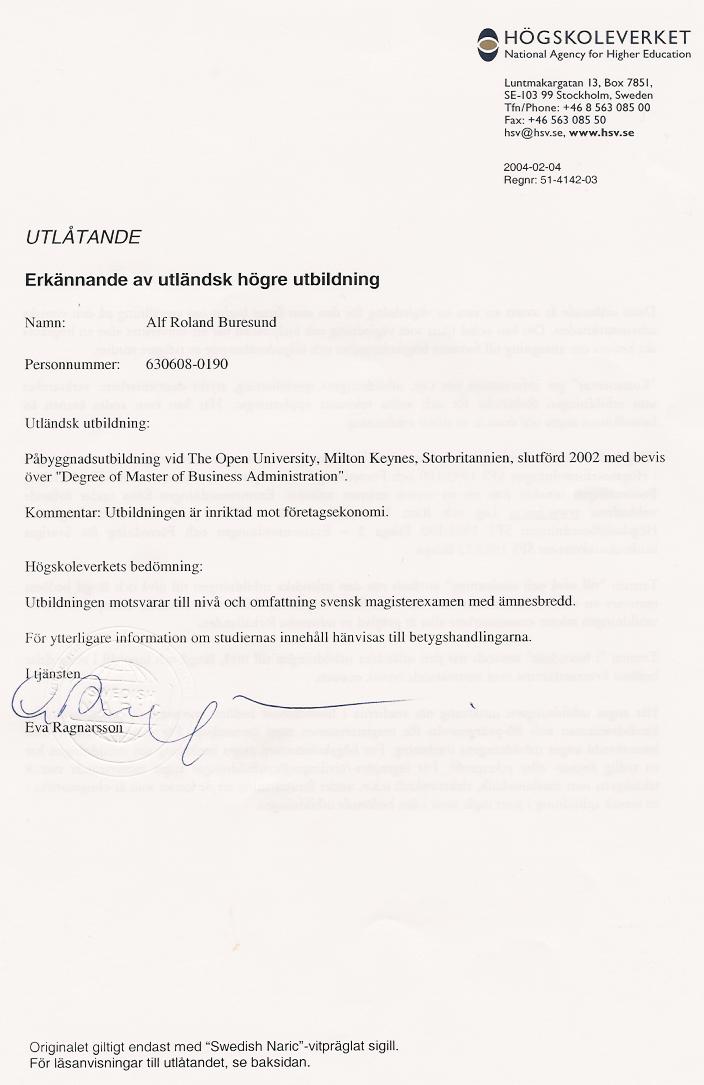 As of 7 January 2004, the association of Civilekonomerna decided that my MBA is equivalent to a Swedish Bachelor degree in Economics! I am now officially a Swedish Civilekonom, even though I have to apply again for a Diploma… Sigh! 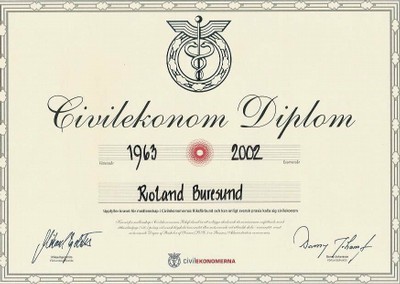 And then I got my Civilekonom diploma as well, extremely hassle-free, from the Association of Economists. Thank you!

Some words that describes the MBA

The University of Warwick

The MBA is a globally recognised qualification in the management field. It offers new perspectives to managers by providing an understanding of the major functions and challenges of business. Participants are attracted to the MBA for a number of different reasons. An MBA allows you to expand your knowledge and understanding of business. This might be as a vehicle for career progression or career change. MBA participants typically have worked for between four and ten years after graduation, although some have up to thirty years professional experience.

What do you get from an MBA? Most people take the qualification to improve their career prospects and earning potential. And the evidence suggests that the MBA delivers on both fronts. The qualification provides senior managers who already have experience in business with an opportunity to enhance their skills and knowledge and gives them a basic grounding across all aspects of business. … The Association of MBAs is widely recognised as the global standard for the qualification and has accredited only 83 Business Schools worldwide. If you are thinking of studying in the States you should check whether your choice of school is accredited by the US body: the AACSB.

First off, there exists other bodies than AMBA, but none is universially accepted as them (except of course the AACSB) and is of dubious utility. Please observe also that the EQUIS rating is a Educational Quality mark, given by the European Comission and does not guarantee the contents of an MBA. Also, please understand that an M.Sc. in Accounting or Economics or Business is not the equivalent to an MBA (see this page for more clarifications) and that AMBA certifies specific programmes, while AACSB certifies whole schools.